10 Things I Wish I’d Known BC (Before Children) 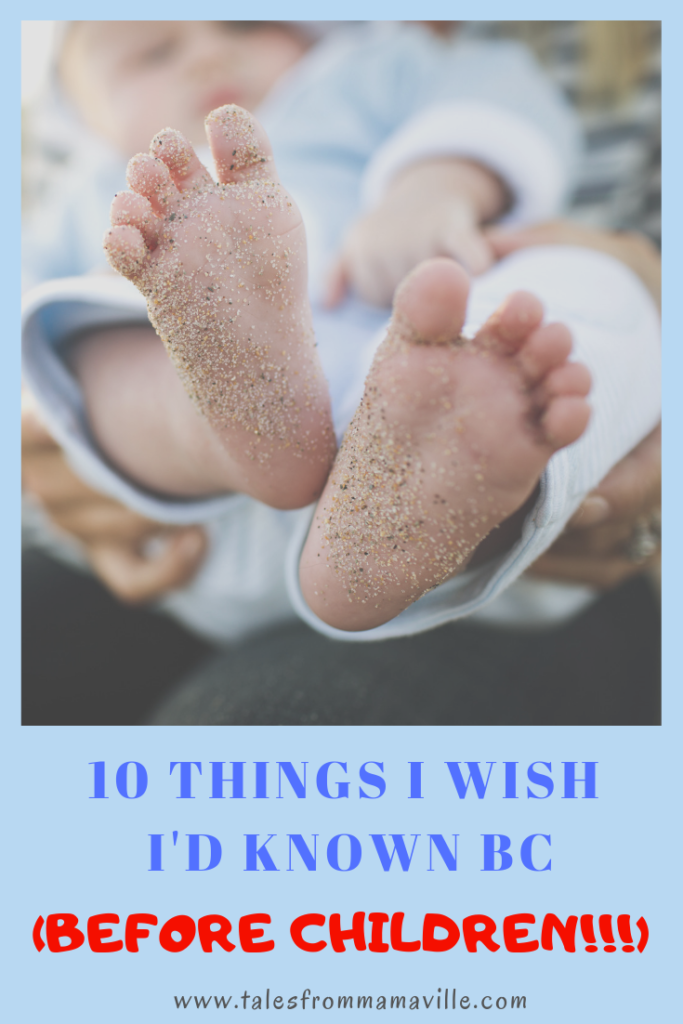 HAHAHA… this headline makes me laugh out loud because 10 things just don’t cut it. There are a zillion things I wish I’d known BC (you know, the ‘real’ shit, not the how-to-put-a-nappy-on-baby kind of stuff the parenting books tell you about), but since this post for The Write Club is about 10 things, I’ll list the most important ones.

There, I said it! It is just assumed that a mother will breastfeed her baby – with ease – and all will be well. NO mums-to-be, that isn’t always the case. Of course BF is a wonderful thing, and is great for bonding and baby’s health, but it is not a walk in the park. It is painful, takes a lot of time to figure out and sometimes just doesn’t work! Yeah we know those boobs were meant for it, but it doesn’t come “naturally” when baby has tongue-tie or refuses to latch or your milk refuses to ‘come in’. Add to that a cranky hungry baby, an exhausted mum and cracked, painful nipples – no, no, no!

2. You don’t need half the stuff you think you need

I get it, I’ve been there too. First baby – too much excitement, too little knowledge and that rush of oxytocin which deceives your mind into telling you your precious bundle WILL need this, that and every other freaking expensive item Mothercare/ Mamas & Papas/ Chicco etc have in store. Trust me, you won’t! The first few months (at least) will go by in a blur of shit-filled nappies, constant feeds and possible spit-ups, and little or no sleep. So forget the cute clothes; stock up on onesies, vests and muslin cloths instead. Don’t stress too much over baby’s cot and mattress; chances are he will be in your bed for the next five years! Toys? He will prefer spoons, the TV remote and cardboard boxes instead. Getting the drift?

This I learned the hard way because Little Man hated sleep (and still does!). Whoever coined the phrase ‘sleep like a baby’ either had an angel sent down from heaven who just drifted off to sleep or probably didn’t have a baby at all! FFS, you’d think something that small that has nothing much to do all day except guzzle down milk and poop it out, would sleep:

a) because of boredom

c) he’s a baby and that’s what he’s supposed to do!

But no, babies resist sleep like the plague. Mine did at least! Putting him down for a nap took longer than the effing nap itself! And wtf is with 5 am wake-ups dude? It’s the weekend!

4. You will feel exhaustion like you’ve never ever felt before

Take this down in blood-writing mums-to-be. You cannot even begin to imagine HOW tired you will feel for forever! Broken sleep for 365 nights (or more, unless you have that angel of a baby), constant night-wakings coupled with this thing called ‘parenting’ will result in exhaustion like you’ve never ever felt before.

5. Parenting will take a toll on your relationship/ marriage

Of course bringing a child into this world together and completing your family is a wonderful feeling, but once the oxytocin wears off and the exhaustion settles in, it’s more guns than roses. Constant contests over who’s more tired, who has to do the night-wakings tonight, who gets to change the poonami all takes a toll on your relationship with your partner. Read my post When Two Becomes Three to know the truth, but it’s not all bad I promise!

6. Self-care will go down the drain

Forget those frequent visits to get your nails done or hair cut, consider yourself lucky if you manage to shower and get out of your PJs more than thrice a week! Hairwashes will only happen on special occasions as will shaving your legs. You will hoard up on dry shampoo and forget what make-up looks like. You will want to exercise to get rid of the pregnancy fat, but will lounge on the sofa and scroll through Facebook once baby’s asleep. Likewise, you will want to drink a smoothie, but will prefer a glass (or three) of wine instead.

P.S. Use this Mummy Cheat-Sheet to help you feel like your winning at life!

7. You WILL resort to screen-time and bribery

No, it doesn’t make you a bad mom, just a real one. I know, we’ve all made those promises to our pre-mum selves about how we won’t let our littles near an electronic device till they are at least 5; how we will not allow them sweets and chocolates except on special occasions and yes, our children will only eat healthy home-cooked meals. THAT IS SO FUNNY, as we will whip out our phones and blast ‘Daddy Finger Mummy Finger’ on YouTube just to get them to eat those chicken nuggets after they’ve already gobbled down a packet of haribos.

8. Alone-time is so precious… especially on the toilet!

Ok, I was aware that after becoming ‘mum’, I would be responsible for taking Little Man everywhere I went. But I didn’t realise it would leave me with NO alone-time/ me-time till he officially had to be without me (like when he started nursery). And I did not foresee my child sitting on my lap even when I’m on the loo! That is – pun intended – really taking the piss!

9. That ‘Muuuuuuuuuum’ would be the most loved and hated word at the same time

Once you’re at ‘that’ stage of life when you want a baby, ‘mum’ becomes a beautiful word. Especially when your own semi-toothed cherub says it for the first time (double whammy if it’s his first word!). But when that cherub becomes a nasty threenager and fournado who shouts out ‘muuuuuuuuuum’ ALL DAY for EVERYTHING, aaaaaargh!

10. Mumguilt will creep up on you time and again

This one’s a real bummer (ok, apart from the fact that babies don’t sleep and you’re perpetually tired). In a word, Mumguilt sucks big time and eats up all the joys of parenting. You feel like a terrible person and the world’s worst mum every time you put the TV on so you can get half an hour’s (or three hours) peace. You feel it when you drive through a McDonalds for ‘another’ takeaway dinner. You feel it when you’re shouty mum, when you couldn’t be arsed to spend the afternoon crafting, when you skip lines from your child’s favourite bedtime story because you’re too tired… I wish I’d known that Mumguilt is one of the worst feelings…

Want to know what other parents wish they’d known prior to becoming parents? Check out these gems…

Me, Them and the Others

MY TRAVEL TIME MACHINE... I look at my magnet boa