The Rise of the Threenager 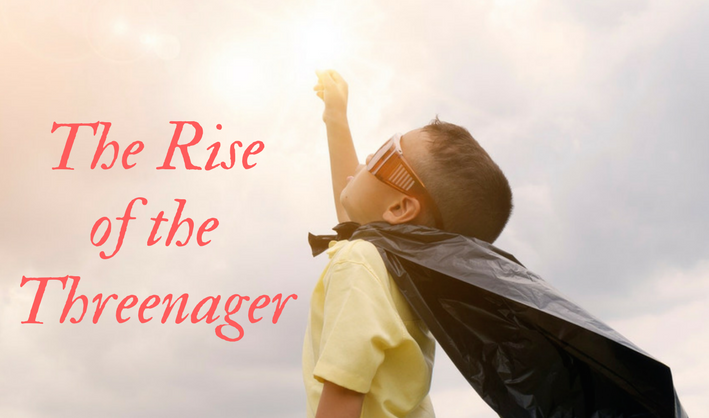 Mums of new borns, one year-olds and two year-olds, I’ve got news for you! If you thought the Terrible Twos were the most terrible part of parenting, wait till your toddler turns three! And becomes a Threenager. It’s much like the Terrible Twos – only bigger, louder and nastier!

Picture a typical teenager. Moody, defiant, challenging. That’s EXACTLY what your Threenager will become, coupled with the fact that he is unable to reason logically with you. So if he wants his sandwiches in triangles and you have cut them into squares, God help you. If she wants to wear a purple striped top with pink frills at the bottom paired with green tights, she must and will have her way. Such are the ways of a Threenager.

Since I am on the brink of Threenage-dom, and am experiencing it first-hand, I thought I’ll pen down a few characteristics of this *lovely* stage for mums (and dads). Just so you’re prepared, even if you’re helpless!

These are the typical traits of a Threenager…

1. This *wonderful* stage doesn’t begin at three; very often it starts at around 2.5 years and no, my lovelies, it doesn’t vanish on toddler’s fourth birthday. It continues well into the fours. So I’ve been told. Sigh!

2. Tantrums. THE most significant/apparent/loud/embarrassing/exhausting (feel free to add more adjectives) aspect of the Threenage years. Of course, you’ve lived through them through the Terrible Twos, you’ve experienced them in a supermarket/ at the park/ at your family get-together… so what could be worse, you innocently ask yourself. Hahahaha. These tantrums are LOUD. And FIERCE. And accompanied by some seriously dangerous physical manoeuvres (see point 3).

3. Don’t underestimate your Threenager’s physical strength. Especially when in the midst of a tantrum. The ‘arched back’ (not in a yoga kind of way) leading to the ‘deadlift’ will leave you a) helpless and b) with a broken back. Best advice: let your toddler cool off before attempting to pick him/her up when sprawled on the floor, tantruming.

4. Threenagers have an innate knack of knowing how to successfully prolong bedtime. Fussing, tantrums (again), excuses, faking fear/ thirst/ hunger/ whatever-else-they-can-think-of – these will become your new bedtime routine. You can read all about my bedtime blues here.

5. Threenagers are strong-willed. Determined. Won’t take no for an answer. All good qualities but not for reasons like insisting on wearing a jacket in 32 degrees. Or eating toast ONLY if it is cut in triangles and not squares. Or wanting to go to the park on the wettest, coldest, most miserable day. You have two options. Say ‘yes’ and give in. Or say ‘no’ and be prepared for… you guessed it… a full-blown tantrum!

6. Threenagers are extremely unpredictable. Almost two-dimensional. One day they love Rice Krispies, the next it is THE WORST cereal on the planet. Nothing besides Cheerios will do. If they go to nursery with a smile and a happy wave on Monday. DON’T expect it to be the same on Tuesday. There could very well be whining. And tears. And tantrums of course.

7. Which leads me to point number 7. Threenagers are very, very moody little people. There will be tears at the drop of a hat. For no logical reason, but over time you will miraculously understand their crazy logic. Like when we were out the other day and I picked Little Man up to put him in his carseat. He erupted like a volcano and I had no idea what had happened. Had he gotten hurt? Startled? What? Help! Till I finally understood his muffled words amidst the screams and tears – he wanted to climb into his carseat himself! Really??? You will learn to accept that your three-year-old will have weird demands at weird times and in weird places, but rest assured, that weird will become your normal.

9. Everything will pretty much be a struggle. Refer to all the above points. And remember: this too shall pass. And when it all gets too much, sit back, take a break, sip some wine and remember those spontaneous hugs and ‘I love you’s’, the adorable things they say and do, and all the happiness these little dictators have brought into your life. And sip some more wine…