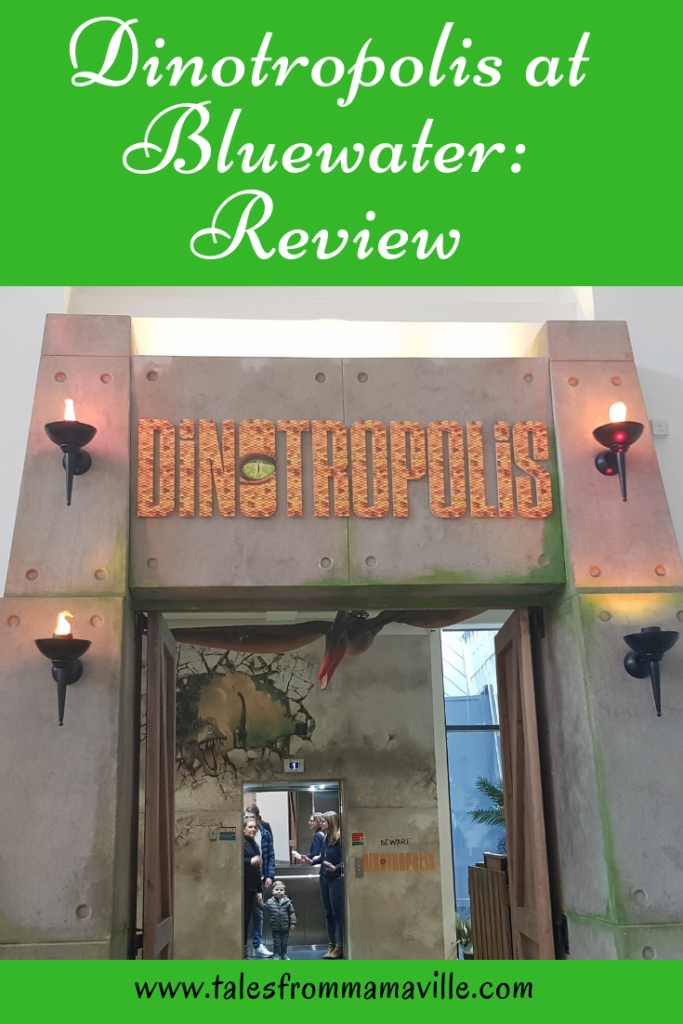 Over the weekend, we visited the latest kids' attraction at Bluewater, Kent – Dinotropolis Adventure Park. Ok, so it's not an actual open-air adventure park but is a soft-play with a 'roar'some twist. Besides the rather sprawled out soft play area it also houses other dinosaur-themed activity areas (which are quite amazing) and life-size animatronic dinosaurs on display. Here's what we thought of Dinotropolis…

Since the centre-point and largest area is the soft-play, let's start there. In all fairness, it's a decent soft-play – quite big (three storeys), not too cramped up and having the usual stuff (big slides, ball pit, rope bridges) plus some extras like the ball-shooting range, deceptive mirrors and some life-size balls!

What was a nice surprise was the Raptor Racing track situated on the ground level – kids over the age of 4 can get on pedal-powered go-karts and race around a track dotted with animatronic dinosaurs.  A nice touch, different from other soft plays – like most of the kids there, Little Man didn't want to get off his kart!

This section is, in my opinion, what sets this soft play apart from the rest.

There are three main elements to the Discovery Cove. The first is the interactive sand table where children can dig and create volcanoes, mountains, even lakes and see dinosaurs roam around their creations. This was a hit with most of the kids, as was evident.

There was also a small sandpit with hidden fossils for the kids to dig out.

The second part of this section was the arts and crafts corner where kids can choose a pre-drawn dinosaur, colour it in, add their name and then scan it and voila! their dinosaur with their name will walk around the big screen. It is quite magical for the kids to see their creations come to life. Absolutely lovely idea, I think!

And the third part of this section is the Build a Dinosaur area which has two dinosaur skeletons which can be 'built' with foam pieces.

This is not included in the main entry ticket; you need to shell out an additional £3 for this. It is basically a very dark room in which you have to avoid the laser beams and reach the other end, without waking the sleeping dinosaurs. Little Man won the challenge and was thrilled to bits about it! Long queues, but I guess that should subside once the novelty of the place wears down. Nice to do once, but won't be paying an additional £3 to do it every time.

There is a separate toddler area for ages 1 to 3 which has a ball pit, a small slide, soft blocks and the other usual stuff.

There is a cafe with all the usual things you would expect at a soft-play – sandwiches, snacks, treats, hot and cold beverages, hot meals and kids meals. There is also a breakfast menu that is served till 11.30 am. Little Man tried the fish fingers with chips – no complaints except that it took over 45 minutes to come! You can view the full menu here.

Ok, so now that my review of the entertainment area is done with, let's get to the other stuff. First things first, the price:

In my opinion, leaning towards the expensive side, considering it is still essentially a soft-play (with some themed additional bits on the side).

The 'Discovery Pass' is £15 (includes the Dino Escape Challenge)

The cost is the same for all children over the age of 19 months (which is a bit unfair as the Toddler area is much smaller and most toddlers won't do much of the other interactive stuff). All passes allow the child in for 1 hour 30 minutes.

Another thing that won't go down too well with most is the fact that adults also have to pay £5 per person to enter. This includes a free drink but I have never paid for myself to enter a soft play.

There is a buggy park (which is great), shoe slots and lockers, but there isn't much space to put your things or sit down bar a few chairs and the cafe seating.

Would I go back?

In a nutshell, it does have more to offer than a regular soft-play, especially for kids past the toddler years. It is good for a change or for a special day out, but a tad expensive for a regular rainy-day hangout.

You can find Dinotropolis on the 1st floor of Bluewater next to the cinema and above Gravity.

Disclosure: We were given free entry in exchange for the review; however, as always, all opinions (and pictures) are my own.

Childcare at your fingertips: Childcare.co.uk Review