Why is it STILL so hard? (How to effectively manage those tearful drop-offs) 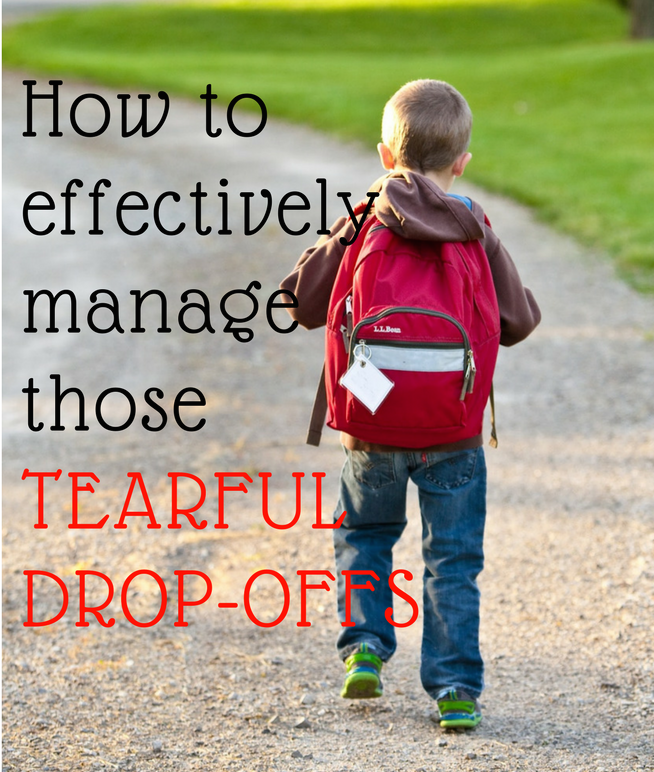 I've spoken about Little Man's tearful drop-offs when he started nursery almost two years ago. As with most children, the settling-in period was tough. Very tough. For him and for me. To see those tears every morning as I tried to smile and walk away, even as he screamed "Mummy" and hoped I would turn around. To know I was leaving my little baby – unhappy, even if just for a while – while I enjoyed some child-free time. To begin to question my decision: was he still too young? Would he become introverted and insecure? Would he begin to hate me?

Of course like most children, he was fine ten minutes after the drama, making friends and taking in everything around him. He would then tell me about his exciting day, his new friends, the new toys. I knew he loved it. I was at peace.

Then he had to make the move to pre-school, and even though the nursery staff managed the move, there was that initial bout of apprehension. And a few tears. But it was easier. He understood more. He had been there and done that, and knew what to expect.

All was well. He was happy.

Then over the summer we moved house. Which meant a big change for Little Man and of course, a new pre-school and friends and rules. I wasn't sure what to expect: would it be back to tears and protests, or would it be smooth sailing now that he was much older and understood so much more? The two times we visited the school, and spent time there, he absolutely loved it. And immediately felt at home. I was relieved. And happy.

The summer went by and finally it was time to start his new pre-school. And all hell broke loose! The tears and protests and 'Why can't you stay with me mummy?' pleads began. All over again. To be honest, it took me by surprise. I really expected it to be smoother, considering he is two years older than when he first went to nursery, and he's so much more mature now. And he's been there. He knows what it's about. So why were we back to square one?!

Yes it's a new school.

Yes he didn't know the teachers or his classmates.

Yes the past few months have seen a lot of changes for him.

Yes he's had a long four-month break since we moved and he started his new school.

He's NOT a baby anymore.

He's been to nursery AND pre-school before.

Most of his friends are ok, and they've gone on to reception (Little Man is September born so he starts school only next year).

I was confused. And a little irritated. Yet, I was softer on him this time around (experience maybe?). I took each drop-off one day at a time. And learnt how to effectively manage those tearful drop-offs.

These are the lessons I learned. I hope it can help you when faced with settling your child into nursery/ school.

1. Deal with the situation from the heart. Not from the mind. It makes it easier for parent and child.

2. Empathise with them. Look at the situation from their perspective. Imagine being with your mum for the first few years of your life, and then suddenly being thrown into a room full of new faces, and knowing you won't see your mum till the end of the day… it is a pretty huge deal for a two-year-old.

3. As stressful and (after a point) irritating it might seem, don't shout at or threaten your child (though I confess I succumbed to doing both at first). They are already scared. They need to feel love and security. Give it to them in abundance.

3. While threats are a no-no, rewards and reward-charts sometimes work wonders. Give them an incentive to go to school. Tell them they will get a star or a toy or a treat if they go in with a smile.

4. Talk to them about nursery/ school so they know what to expect. Enact a happy drop-off. Play pretend 'at nursery' games, talking about all the fun things they can do there. Read books about starting nursery.

5. It's tempting to make up stories and tell them white lies, but the sooner they realise that school is something they will have to deal with for years to come, the more accepting they will become of it. Tell them the real thing: grown-ups go to work and children go to school. But make it sound exciting and enticing – they have to go so that they can make new friends and learn to read by themselves and learn interesting things about the world.

6. This is something I invented myself. This time around Little Man was more vocal and told me: "I like my new school and I like my teachers. But I just miss you mummy." So I invented the phrase 'Happy missing' – it's when you don't have time to miss someone because you are having so much fun! I tell him that with so many toys and friends there, he will have no time to miss mummy. So although I am not around, he shouldn't be sad…

7. Try and arrange play-dates or meet-ups in the park with a couple of your child's classmates. Let them get familiar with one another in a more informal setting. Once your child has made some good friends, he will be happier to go to nursery/ school.

8. This one's very important, and even the teachers will tell you this. Make drop-offs as quick as possible. It is tempting to linger on and hold your baby and wait till the tears stop, but the truth is that while you are around, the tears won't stop. By being around, you are just prolonging the process, making it harder for you and your child. A quick kiss, smile and a wave with a "I'll be back in the afternoon/ evening/" and then leave.

9. Give them a time frame of when you will be back, so that it helps them understand. If it's a short session, tell your child you will be back after he has his lunch. Or after snack time.

10. Above all, just be patient with them and give them all the love and attention they seek. Make your time at home with them extra-special so they still feel secure.

PS: Little Man is now settled and happy in his new school, and has even made some good friends. All is well again. Until reception next year…

I've also linked this post with these fab linkies

How to support your child through online learning

How do lifestyle choices affect my child’s education?